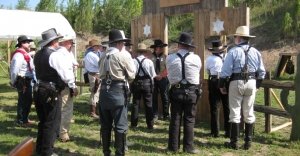 Welcome to Cowboy Action Shooting at the Bar-E Ranch

The Barrie Gun Club is a SASS (Single Action Shooting Society) affiliated club and the Bar-E Ranch adheres to the rules and principles of SASS. Through our affiliation with SASS we are able to take advantage of being part of a global society with approximately 100,000 members.

The Bar-E Ranch is a dedicated group of like-minded shooters who are smitten by the fantasy and true grit of the “old west. Cowboy Action Shooting is a multi-faceted shooting sport in which contestants compete with firearms typical of those used in the taming of the Old West: single action revolvers, pistol caliber lever action rifles, and old time shotguns. The shooting competition is staged in a unique, characterized, “Old West” style. It is a timed sport in which shooters compete for prestige on a course of different shooting stages.

So if you want to try something unique, put a new spin on an old lifestyle and share great times with new friends, then come out and join an ever-growing group of people.

We hold practice matches every second and fourth Saturday of each month throughout the year.